I read a really good article today about the 10th Amendment written by Jeffrey Rosen in today’s Wall Street Journal. The article was titled, “Divided We Rise”. Don’t leave me now just because I might talk about history some, because it is interesting and it might make you think just a little. LOL.

I will keep it brief and boil it down to its essence; although I am sure there have been many long and opposing papers written about this amendment.

The Tenth Amendment to the U.S. Constitution reads:

Now you can imagine this was a controversial amendment when it was adopted and guess what, it still is. The authors of the Constitution were divided on this one. Alexander Hamilton wanted a strong centralized government to keep the states in line while Thomas Jefferson and James Madison did not want a centralized government thousands of miles away telling local people how to live their lives.

As our society has grown in complexity, so has the strain on the 10th amendment. More and more federal laws and rules are now in place that try and make us more consistent across state lines. Some are good and some not so good.

I believe in a strong 10th amendment. For me the test for whether or not it is a state or federal issue is this:

The individual state shall have jurisdiction over all things that exclusively affect only the residents of that state. Any state law or policy that could impact residents of other states in any way shall be under federal control or federal law shall supersede the state law.

Examples: If the state of Utah wants to have lavender school busses, so be it. If the state of New Mexico wants drivers licenses to be issued to 15 year olds, no problem.

Let’s pick one a little more difficult. Let’s talk about federal standardized testing for high school graduates where in order to receive a high school diploma from any state high school a student must first pass a standard test developed or approved by the federal government. To me, this should not be under federal jurisdiction. If a state does not set its own standards for high school graduates then only the children of that state will suffer if they receive a sub-par education. This will self-correct itself very quickly when the parents of that state realize their children are in a deficit when compared to other children in other states.

How about immigration? Well to me this falls under federal jurisdiction. Let’s say, New Hampshire, Louisiana, Kentucky, and Ohio pass state laws allowing immigrants from anywhere to move into their states without any background checks because they need laborers. Let’s say Texas, Oklahoma, Tennessee, and Minnesota pass laws that they are not going to detain illegal immigrant criminals because they do not feel it is their job to enforce federal laws. In both of these examples people from other states could be harmed by the laws these states passed. In both instances, federal law should preside.

We could discuss this for a long time but to me it is important that the 10th stays strong. It is just one of the checks and balances that our founding fathers included in that brilliant document: The United States Constitution. 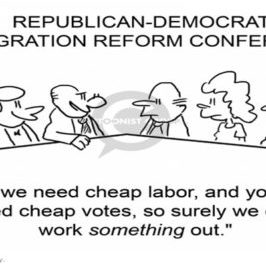